Q & A with the 2018 Global Citizen Award Winners

Every year, SCIC honours Saskatchewan people who make amazing contributions to international development, cooperation, peace and justice with the Global Citizen Award. In advance of the award celebrations in Saskatoon (Februay 3) and Regina (February 8), we took a moment to interview some of this year's honourees, Dave Mitchell, Abdullahi Nunow, Marcella Pedersen, and Terri Sleeva. Here are some of their words of reflection and advice: 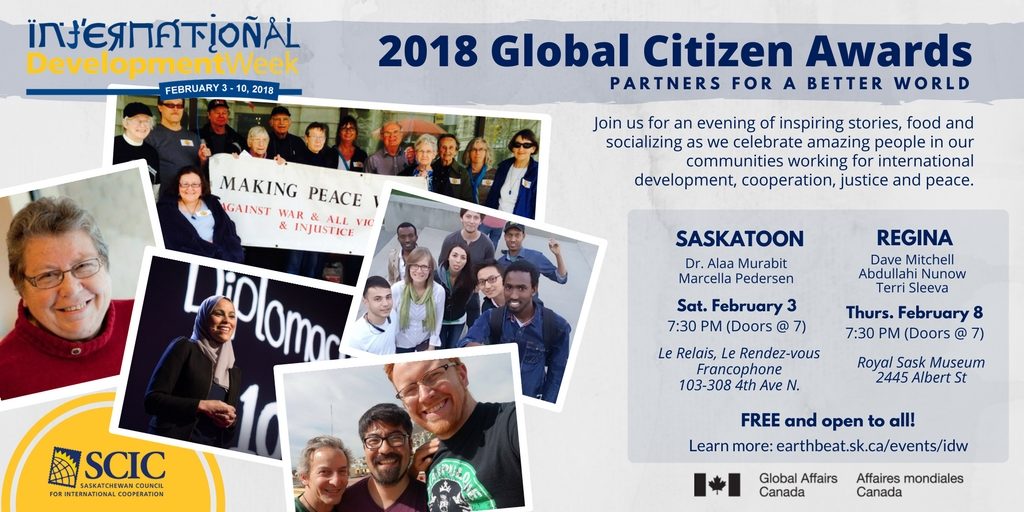 *Dr. Alaa Murabit will be sharing her thoughts via a keynote address on Feb 7 in Saskatoon entitled "The Politics of Prosperity and Peace" - a part of the University of Saskatchewan's conference: People Around the World: Global Learning, Mutual Gain.

What does Global Citizenship mean to you?

DAVE - At its core, I understand global citizenship as an attempt to live in the knowledge that everything is connected, that our actions have consequences, and that understanding our history behooves us to do right by each other. I think it also entails a commitment to universalism and radical egalitarianism – recognizing that we each do better when everyone, regardless of gender, sexuality, nation, racialization, citizenship status, place of birth, or any other marker of difference, has what they need to thrive.

For Canadians specifically, I think global citizenship requires both a commitment to do the work of decolonization that is our legacy, and a willingness to learn about, and work to change, our nation’s foreign policy and its often destructive impact on democratic and community based movements throughout the world.

ABDULLAHI - It is a privilege for me to receive such an important award. Even though the passion I have for helping those in need motivates me to do the charity work that I do, being recognized for such efforts, which winning the Global Citizen Award offers, is something to be proud of, which I am.

MARCELLA - Global citizenship means supporting and standing in solidarity with our brothers and sisters around the world, not only with financial support but also human resources. I agree with all of Mark Bigland Pritchard’s statement: “A global citizen is someone who can look beyond the needs of their own community, their own country or their own ethnic group and feel a connection with their fellow human beings worldwide. Global citizenship requires the protection of and care for the living world in all its diversity. Humans are part of the large web of life and are dependent on it.”

TERRI - Global citizenship should be the major focus of all inhabitants of Mother Earth. Resource extraction, climate change, starvation and wars are designed to make people into haves (1%) and have nots (99%). Governments are under the direction of the elites or dictatorships which are very self-serving. When the focus of global citizenship is enacted, all people will treat all others with dignity and respect and as equals. To me, global citizenship is the opposite of profit driven greed which exploits Mother Earth and its inhabitants.

What do you feel are some of the biggest challenges currently facing our global community? What do you identify as possible solutions to these challenges?

ABDULLAHI - Illiteracy. In many parts of the world, young people do not have access to quality education. In some parts of the world people don’t know about what value does human life represents, all they care is themselves. One thing that will help and solve this problem is making awareness and educating people about love, equality and caring to one another.

MARCELLA - Climate change, food sovereignty, and concentration of economic power in fewer and fewer hands. Promising solutions are using renewable energy and increasing peasant or small-scale farming (i.e. limiting large scale farming), treating the land with dignity (soil mulching). Solidarity of peoples standing up against economic powers has had some measure of success regarding trade deals and influencing corporate responsibility.

TERRI - People’s ignorance is paramount because they think that because it’s on the other side of the world, they will never be affected. The world is being destroyed in the name of money and people are functioning in their little bubbles (I’m referring to most government officials). We need to educate, educate, educate and groups are banding together to resist initiatives that are untenable.

DAVE - We see the consequences of growing xenophobia—fear of the other, of difference, of foreignness—in the news almost every day. But I think that this is actually just a symptom of a deeper challenge, which is the unprecedented, deepening wealth inequality we’re witnessing. Five men now own as much wealth as half of the world’s population. Two Canadian families own as much as the poorest 11 million Canadians.

This level of inequality is incredibly destructive in so many ways. Of course those of us living in a degree of comfort can and must speak about and promote diversity, tolerance, and inclusion, but unless we’re also working to undo that extreme inequality through redistributive efforts, we will have a very hard time overcoming the kinds of responses one would expect when large numbers of people experience hard times with no hope of improvement.

MARCELLA - As a preteen I was sexually abused, and I have often wondered if that has influenced my drive to always fight for or stand in solidarity with the underdog. At 16, through the National Farmers Union’s youth camp, I learned the “power of one”! Also through my work in the NFU, I was encouraged to never give up. Through the church, I have learned about faith, hope and love and the power of forgiveness.

From Associated Country Women of the World Conference, a woman in the ladies’ washroom from Trinidad taught me to not waste water. She was on the floor crying her heart out when I asked her what was wrong. When she saw women brushing their teeth with a full stream of beautiful clear clean water running full blast from the taps, she became overwhelmed emotionally, and commented, that she carried every drop of water that her family uses.

DAVE - These days I mostly find inspiration in books. Most recently, books by Nick Srnicek, Kojin Karatani, Lewis Hyde, Timothy Morton, plus anything written by Arundhati Roy, John Berger or Rebecca Solnit. But also from watching how my father, my mother, my sister and my partner engage with the world as global citizens each in their own right.

ABDULLAHI - I draw my inspiration from my own experience. I faced lots of obstacle accessing education and I know how kids facing the same challenges feel.

TERRI - I go to St. George Orthodox Cathedral every Sunday to recharge my batteries. I believe through God, everything is possible and will benefit others. The bonus is seeing people react positively to initiatives I was involved in because it changed their situation for the better. I’m addicted to warm fuzzies!!

Tell us about a teacher, mentor, or other role-model in your life.

TERRI - There have been many mentors in my life, including Catherine Verrall, Florence Stratton, Su Deranger, Peter Gilmer, Gloria DeSantos & Larry Kowalchuk. I studied their actions to improve bad situations and found the results they achieved through hard work to be inspirational. The discovery of critical thinking made my decisions so much easier. An example would be Catherine Verrall who organized a successful conference “Making Peace with Earth”, rode her bicycle into her 80s with a sign that said “bring back Via Rail” and wrote a cookbook. How do you out-do that?

ABDULLAHI - My mom has to be the greatest mentor in my life. Through example, she taught me to be kind and generous. I grew up seeing my mom help neighbours and strangers alike. Humans were equal before her eyes as the recipients of her charitable activities were random residents of the refugee camp, regardless of ethnicity etc. She taught me that helping out a human in need is a source of self-pride.

DAVE - Michael Stone, a Buddhist teacher and writer who sought to synthesize Buddhism and yoga with psychotherapy and the political and social issues of our time, is someone whose ideas helped me through some difficult times several years ago. Through workshops and talks he gave in Regina we became friends and collaborators. He died suddenly and tragically last year. He had dedicated his life to helping people work personally and in community for a better world, and I hope his teachings and his example will continue to inspire many more people, even as those who knew him mourn his loss.

MARCELLA - Through Development & Peace, via Father Harvey Valle, I learned the difference in actions between charity and social justice, and from Pope John Paul II, I learned that you can’t have peace without justice. Through Professor Chris Lynd, I learned to question our own beliefs and practices that lead us to see two possibilities of action: competition vs. cooperation. Whereas competition leads to indifference and then to domination, cooperation leads to compassion and then to solidarity. Through the peace movement in Saskatoon, I learned that you can only change people through education or through the result of suffering. Because of that, my focus has been on education and alleviating suffering via Development and Peace, the National Farmers Union and Catholic Women’s League, and by financially supporting other justice-based organizations.

What do you see as one of the most encouraging or innovative trends creating positive change in our world?

DAVE - Social media-fed movement moments have accelerated the pace of cultural change in ways that I think we’re only beginning to grasp. These moments offer frontline activists who have been organizing for years incredible openings to change our cultural assumptions and our sense of what’s possible.

ABDULLAHI - I would say the internet. It’s a tool that we have seen could be used to not only spread democracy, but also aids in charitable causes by enabling donors to crowdfund. If used properly, the internet has the power to bring positive changes in people's lives.

TERRI - People are finally starting to come out of their bubbles and seeing what is really going on around them. As a result, more people are being involved in rallies and other civil disobedience. Indigenous people are beginning to speak out about the injustices they have lived with for the last 150 years and earlier. The university puts on workshops to teach about different perspectives in the world and the injustices people have endured. Quite a few of these workshops left me in tears and was life changing.