Love Changes Everything: It Starts at Home - a Tribute to Bill Curry

SCIC is extremely saddened by the passing of Bill Curry, a long-time member and active supporter of SCIC and the broader social justice community in Saskatchewan. In the words of his wife, Dale, "Bill Curry passed peacefully in his sleep on the night of Oct 12th, 2015. This was unexpected. He was healthy and full of life during the preceding Thanksgiving weekend. He was beloved by so many."

When thinking of how to pay tribute to Bill, it dawned on us: what better way to honour the life and legacy of someone who touched so many, than through his own words and those of his family.

In preparation for SCIC's 40th anniversary, we were lucky to spend a lot of time with Bill interviewing him for our 2014 Global Action Calendar. In true Bill fashion, the interview became a unique family affair involving his wife Dale and their daughter Elizabeth, as together they reflected on the importance of living social justice work in all relationships. They also helped us select the resources for the LEARN and ACTION sections that are a staple of the publication. In reflecting on these words, may we continue to be inspired by his example and his spirit that lit up every room he entered. 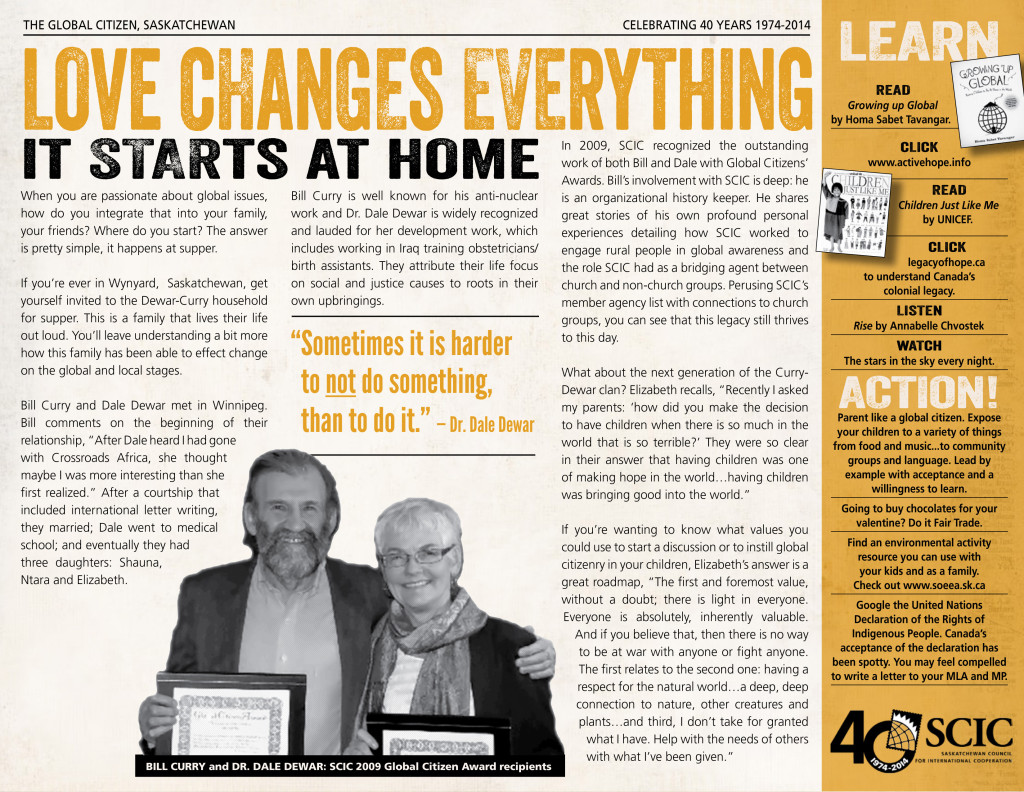 When you are passionate about global issues, how do you integrate that into your family, your friends? Where do you start? The answer is pretty simple, it happens at supper.

If you're ever in Wynyard, Saskatchewan, get yourself invited to the Dewar-Curry household for supper. This is a family that lives their life out loud. You’ll leave understanding a bit more how this family has been able to effect change on the global and local stages.

Bill Curry and Dale Dewar met in Winnipeg. Bill comments on the beginning of their relationship, "After Dale heard I had gone with Crossroads Africa, she thought maybe I was more interesting than she first realized." After a courtship that included international letter writing, they married; Dale went to medical school; and eventually they had three daughters: Shauna, Ntara and Elizabeth.

Bill Curry is well known for his anti-nuclear work and Dr. Dale Dewar is widely recognized and lauded for her development work, which includes working in Iraq training obstetricians/birth assistants. They attribute their life focus on social and justice causes to roots in their own upbringings.

In 2009, SCIC recognized the outstanding work of both Bill and Dale with Global Citizens’ Awards. Bill’s involvement with SCIC is deep: he is an organizational history keeper. He shares great stories of his own profound personal experiences detailing how SCIC worked to engage rural people in global awareness and the role SCIC had as a bridging agent between church and non-church groups. Perusing SCIC’s member agency list with connections to church groups, you can see that this legacy still thrives to this day.

What about the next generation of the Curry-Dewar clan? Elizabeth recalls, “Recently I asked my parents: ‘how did you make the decision to have children when there is so much in the world that is so terrible?’ They were so clear in their answer that having children was one of making hope in the world…having children was bringing good into the world.”

If you’re wanting to know what values you could use to start a discussion or to instill global citizenry in your children, Elizabeth’s answer is a great roadmap, “The first and foremost value, without a doubt; there is light in everyone. Everyone is absolutely, inherently valuable. And if you believe that, then there is no way to be at war with anyone or fight anyone. The first relates to the second one: having a respect for the natural world…a deep, deep connection to nature, other creatures and plants…and third, I don’t take for granted what I have. Help with the needs of others with what I’ve been given.”

The stars in the sky every night

Parent like a global citizen. Expose your children to a variety of things from food and music…to community groups and language. Lead by example with acceptance and a willingness to learn.

Going to buy chocolates for your valentine? Do it Fair Trade.

Find an environmental activity resource you can use with your kids and as a family. Check out saskoutdoors.org

Google the United Nations Declaration of the Rights of Indigenous People. Canada’s acceptance of the declaration has been spotty. You may feel compelled to write a letter to your Member of Parliament.